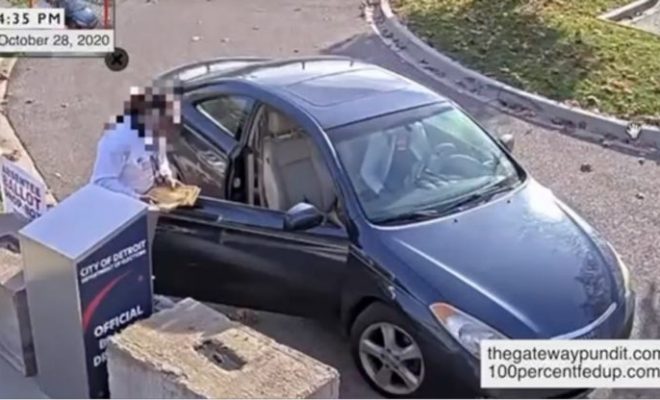 The following exclusive drop box footage from the Balduck satellite voting center in Detroit, MI, was obtained by the Gateway Pundit and 100 Percent Fed Up:

On October 28, 2020, at 4:35, a female driving a blue Toyota with a red air freshener hanging from her rear-view mirror drove up to an absentee ballot drop box at the Balduck satellite voting center in Detroit, MI. A female passenger emerges from her vehicle with a large stack of what appears to be absentee ballots. The female passenger struggles to deposit multiple ballots at one time into the drop box slot and can actually be seen tearing one of the envelopes as she attempts to jam too many ballots into the slot at once. The slots in the drop boxes are supposed to be designed to accept one ballot at a time. The female passenger eventually completes her deposit of the large stack of ballots, and they pull away.

On the same day, at 5:11, only 26 minutes later, she appears again at the same absentee Ballot Dropbox; this time, however, she is alone. She deposits a single ballot while holding a cellphone up, as she appears to be taking a photo of herself depositing the ballot.

Then again, only 21 minutes later, at 5:32 PM, the same woman appears at the drop box, but this time, she has a sizable stack of ballots that she deposits into the Balduck satellite voting center drop box.

She appears again at the Balduck drop box the next day with another stack of ballots, but this time, she is preceded by a red Toyota pick up truck with a driver and passenger in the front seat. The red pickup drives up to the ballot box but never gets out of the vehicle. Instead, the passenger, who is wearing a face mask, rolls down the window and holds two cell phones in her hand. One cell phone [camera?] is pointed at the satellite voting center and the other appears to be pointed at the drop box. The passenger pulls the phones back into the vehicle, inspects them and then repeats the process (perhaps the first images weren’t clear). As the red pickup truck drives away from the drop box, they pass the woman seen driving to the Balduck drop box three times the previous day. She exits her vehicle with a stack of ballots, deposits them into the absentee ballot drop box, and drives away.

Last night, the 2000 Mules investigators, True the Vote founder Catherine Engelbrecht and Gregg Phillips, appeared at an event hosted by MCC in Troy, MI. where they discussed how they were able to use extremely precise and accurate geo-location data of thousands of ballot “mules” to uncover a massive voter fraud scheme that was used across America, and particularly in swing states that flipped for Biden in the wee hours of the morning on the day after the November 2020 election. Engelbrecht and Phillips expressed the importance of everyday citizens obtaining dropbox footage from the 2020 election before the 22-month federal deadline for retaining and preserving election records and data.