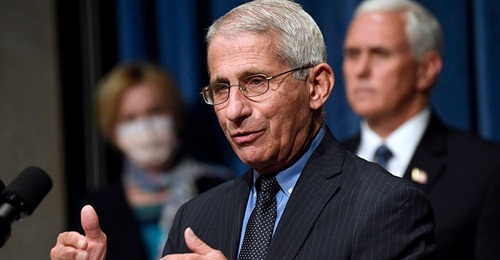 During Fauci’s testimony before the House Select Subcommittee on the Coronavirus Crisis, House Minority Whip Steve Scalise, R-La., asked Fauci if he was involved in the president’s January order restricting travel from China.

“Do you agree with that decision?” asked Scalise.

“I do,” Fauci responded.

“Yes, I do,” the head of the National Institute of Allergy and Infectious Diseases answered.

Fauci went on to say that he was “actively involved” in the administration’s decision to restrict air travel to the U.S. from Europe, and repeated, “Yes, I do” when Scalise asked if he agreed with the move and if he believed it saved American lives. He gave similar responses when Scalise asked about the restriction of travel from the U.K. and the rollout of the administration’s “15 days to slow the spread” and “30 days to slow the spread” guidelines earlier this year.

Fauci responded: “We were in agreement on virtually all of those.”

For months, pundits have speculated about a rift between Trump and Fauci as the latter’s national profile has risen during the pandemic.

White House trade advisor Peter Navarro stoked concerns about such a disagreement when he published an op-ed in USA Today earlier this month claiming that Fauci had flip-flopped on the issue of wearing masks. He also expressed caution over taking Fauci’s advice and claimed the adviser fought Trump on his decision to ban travel from China.

In response, Fauci told The Atlantic: “When the staff lets out something like that and the entire scientific and press community push back on it, it ultimately hurts the president.”