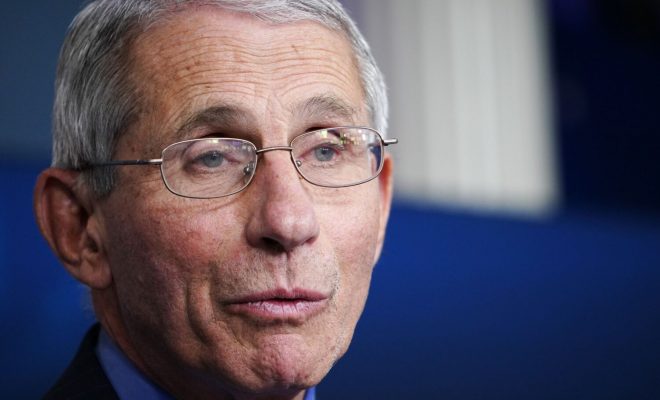 As America’s highest-paid bureaucrat, and indeed highest-paid government employee, Dr. Fauci has managed to amass an impressive portfolio for himself. Reportedly, in fact, it’s worth about $10M.

While it’s all well and good that Fauci is apparently not just great at getting himself onto TV programs but is also good at portfolio management, what is less good is that he is invested in Red Chinese companies.

That’s coming from Senator Marshall, a Senator who hit Fauci repeatedly over his financial disclosures and eventually obtained them, as he announced in a tweet:

He also announced his recovery of those documents in a statement, saying:

“Dr. Fauci lied to the American people. He is more concerned with being a media star and posing for the cover of magazines than he is being honest with the American people and holding China accountable for the COVID pandemic that has taken the lives of almost 850 thousand Americans,” said Senator Marshall. “Just like he has misled the American people about sending taxpayers dollars to Wuhan, China to fund gain-of-function research, about masks, testing, and more, Dr. Fauci was completely dishonest about his financial disclosures being open to the public – it’s no wonder he is the least trusted bureaucrat in America. At the end of the day, Dr. Fauci must be held accountable to all Americans who have been suing and requesting for this information but don’t have the power of a Senate office to ask for it. For these reasons, I will be introducing the FAUCI Act so financial disclosures like these are made public and are easily accessible online to every American.”

Why was Fauci hiding those disclosures and so unwilling to let a GOP Senator look into them? Well, that’s currently unknown, but the China connection might be relevant.

Among his investments is a stake in the Matthews Pacific Tiger Fund. That fund not only holds stakes in Chinese/Hong Kong companies like Tencent, Alibaba, AIA Group, and Hong Kong Exchanges & Clearing. It also holds a chunk of a pharmaceuticals company called Wuxi Biologics Cayman.

Wuxi Biologics Cayman, its website states, aims to “accelerate and transform the discovery, development and manufacturing of biologics through a comprehensive open-access platform, enabling our global healthcare partners and benefiting patients worldwide.”

The investment isn’t, by any means, a smoking gun. All Fauci holds is a stake in a fund that invests heavily in Chinese companies, including a pharmaceuticals company with globalist visions.

But, it must be kept in mind that Fauci would have known about that fund and its China-centric investment strategy. When discussing if China was responsible or not for Covid, it must have been sitting in the back of his mind that a certain chunk of his sizable portfolio would tank if the US blamed China, especially Chinese medical science companies.

Related to that nagging thought or not, he’s repeatedly defended Red China. Whether there was a connection between his portfolio and that or not, it sure is a bad look for Dr. Fauci.

Oh, and another fund he holds is a woke one, the Pax Ellevate Global Women’s Leadership Fund. It, as the NYP reports, “invests in companies highly-rated for “advancing women through gender-diverse boards, senior leadership teams and other policies and practices”’ If you were still somehow wondering where Fauci sits politically, there it is.