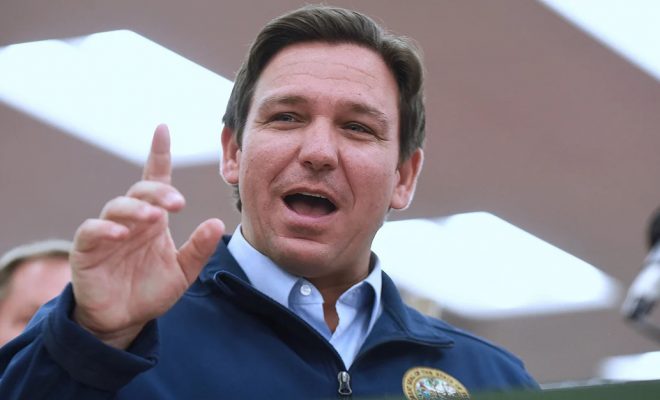 Florida Governor Ron DeSantis Tears The Roof Off Of Biden In New Interview, Even Calling Him ‘Brandon’

Florida Republican Governor Ron DeSantis absolutely laced into President Joe Biden in a recent interview, even using the nickname “Brandon” to refer to him.

“All the problems you see with our country, and there’s a huge amount of problems with Brandon in the White House,” he said in an interview this week. “I mean look, the guy is not clicking on all cylinders, he’s not had a very good year.”

“We’re still strong in the state of Florida. We’re beating Brandon in Florida,” the governor said. “When I got elected, there were about 300,000 more registered Democrats in Florida than Republicans. Well now, for the first time in history, we have more Republicans than Democrats, and we’re gaining more and more every single month.”

The DailyWire explained the origin of the “Brandon” nickname.

Calling Biden “Brandon” comes from the popular anti-Biden slogan “Let’s Go, Brandon.” The slogan started in October at a NASCAR race at the Talladega Superspeedway in Alabama when NBC Sports reporter Kelli Stavast was interviewing driver Brandon Brown after he won the race.

As Stavast interviewed Brown, “F*** Joe Biden” chants broke out in the stands, but Stavast claimed that they were chanting “Let’s go, Brandon.”

The “Let’s Go, Brandon” slogan has since become code for “F*** Joe Biden” and is commonly used at sporting events and various other locations.

The DeSantis interview came after a crushing new poll from Quinnipiac University showed that Biden’s approval rating had absolutely collapsed to a staggering 33 percent. For reference the lowest Gallup Poll rating former President Trump ever had was 34 percent, though it did slip lower in some polls.

“In the two months since signing the $1 trillion infrastructure bill into law, President Biden has by almost every measure bombed big time on the things that matter most,” Axios said in its report. “It’s rare for a president to be at odds with Republicans, moderate Democrats and liberal Democrats — all at once. But that’s where Biden finds himself at the start of an election year that many Democrats believe will result in the loss of the House and maybe the Senate.”

And there is the prospect that Gov. DeSantis could be getting in gear for his own presidential campaign in 2024, which would explain why he is hitting Biden hard right now, including defying Biden on vaccine mandates.

DeSantis talked freedom and individual liberty with Fox News host Maria Bartiromo in December as reports swirled that some elected leaders around the country may soon require their citizens to get a COVID-19 booster or risk alienation.

During the segment, the “Sunday Morning Futures” host said the notion of being “fully-vaccinated” may soon mean a pair of initial vaccines plus a booster, citing what Dr. Anthony Fauci has said before asking DeSantis if he had gotten a booster shot.

The governor demurred, however, saying instead that he “did the normal shot” before adding that it is “people’s individual decisions about what they want to do.”

“So, I’ve done whatever — I did the normal shot, and you know, that, at the end of the day, is people’s individual decisions about what they want to do. But these boosters, in terms of — now Florida, we don’t, we banned vaccine passports; we won’t let them fire [you], even private businesses, over this because we don’t think that’s appropriate,” he said.

He added: “But one of the reasons why we took those steps is because we knew the definition of vaccination would be a shifting target. And I predicted this a month and a half ago, and people said that I was wrong, and now we’re starting to see it come to fruition.

“So, there’s gonna be people who’ve done maybe two Pfizer shots who are not doing [the] booster, and they could be considered in certain parts of the country to be unvaccinated, and then denied the ability to participate in society like everybody else,” DeSantis continued.

“It’s gone way, way too far, and that is a decision that people should make for themselves, but they should not have their rights, freedoms, or liberties restricted based on these boosters,” he said.