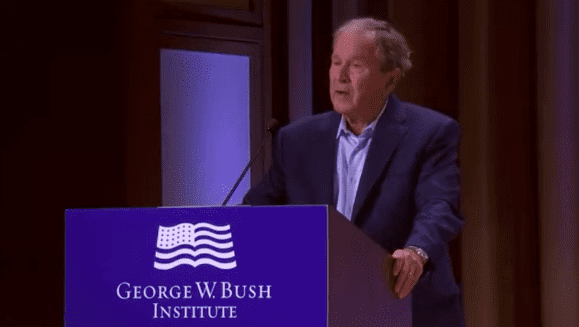 On Wednesday, former President George W. Bush made an unfortunate slip up during a speech condemning Russia’s invasion of Ukraine. Bush was discussing democracy’s importance and the threats it faces in the U.S. and abroad when he made a gaffe that has since captured a significant amount of attention.

“In contrast, Russia elections are rigged,” said Bush. “Political opponents are imprisoned or otherwise eliminated from participating in the electoral process. The result is an absence of checks and balances in Russia and the decision of one man to launch a wholly unjustified and brutal invasion of Iraq – I mean, of Ukraine.”

Bush then laughed it off, shrugging as he said “Iraq, too” under his breath.

In 2003, Bush made a controversial decision to invade Iraq in pursuit of weapons of mass destruction. This move, which claimed the lives of over 4,000 U.S. troops and tens of thousands of Iraqi civilians, has been widely condemned over the years.

This gaffe caused social media to explode with people making fun of Bush for “accidentally admitting” his wrongdoings, some referring to it as a “Freudian slip.”