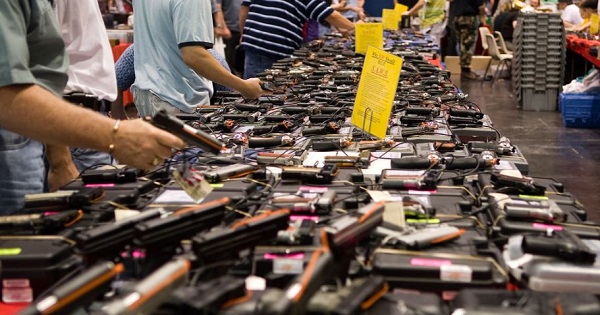 The Crossroads of the West gun show, banned at the Del Mar Fairgrounds since the beginning of the year, will return in September and December, officials said Tuesday.

Whether the shows will continue after that depends on a lawsuit now in the federal courts, said Richard Valdez, president of the 22nd District Agricultural Association that runs the state-owned fairgrounds.

The fall and winter events were added after a San Diego federal judge issued a temporary injunction last month ordering the fair board to lift the ban until the lawsuit filed by Crossroads owners B&L Productions, Inc. is settled.

“We’re waiting for the court to provide further guidance as to what the next step will be,” Valdez said, adding that a ruling is expected by the end of the year.

The board met Tuesday to discuss the litigation in private. Valdez announced afterward there was no action they were required to report.

Residents and local elected officials, many wearing the orange T-shirts of the gun-safety group NeverAgainCA, filled the boardroom before the closed session began. Public comments were taken for 30 minutes before the room was cleared, and almost all the speakers urged the fair board to “stay the course” and uphold the ban.

“Listen to our community,” said Debra Schade, president of the Solana Beach School District board of trustees. “Be bold, be brave. Your job here is very important.”

City councils in Del Mar, Solana Beach, Encinitas and elsewhere voted for resolutions in support of the ban. At least one city, Santee, went on record to oppose it.

Cities closest to the fairgrounds are the most fervent supporters of the ban.

“It is really important to understand that the communities around you are four-square against gun shows at the fairgrounds,” said Del Mar Mayor Dave Druker.

“We are very concerned about where you will go from here,” said Solana Beach City Councilwoman Kelly Harless. “You can’t let them intimidate you out of doing the right thing.

“The cost of defending this lawsuit is nothing in terms of the cost if something … ” goes wrong at the gun show, she said.

One person spoke Tuesday in defense of the shows, Lance Pelky, a San Diego resident and host of the AM radio show Gun Sports Radio. He said the shows are protected by the 2nd Amendment to the U.S. Constitution, and that those who opposed them are ill-informed.

No one at the meeting spoke for the political action group San Diego County Gun Owners, which has rallied large crowds of gun-rights supporters at some of the fair board’s previous meetings.

Opposition to the Crossroads shows surged across California last year after the Parkland, Fla., shootings that killed 17 high school students and staff members on Valentine’s Day.

Members of the nonprofit NeverAgainCA, founded by Del Mar resident Rose Ann Sharp, demonstrated with signs outside the local firearms festivals last year, and frequently attend fair board meetings to request the ban.

The board voted last September to stop the shows until the fair district could write a policy to allow informational presentations only with no sales of firearms or ammunition. That policy is now on hold pending the resolution of the lawsuit.

Judge Cathy Ann Bencivengo said last month that B&L Productions is “likely to suffer irreparable harm” without the events, and that the company’s lawsuit against the fairgrounds was likely to succeed. She ordered the fairgrounds to make the next available dates open for the show.

Crossroads President Tracy Olcott could not be reached Tuesday afternoon. In the past she has said the events, which her family started more than 40 years ago, are safe, family-oriented activities where people can shop and share like interests.

Tiffany Cheuvront, an attorney for Crossroads, said last month that the judge’s decision was “a huge first victory for those involved in the case.”

Assemblyman Todd Gloria, D-San Diego, has introduced legislation to permanently ban the sales of guns and ammunition on state property.

Assembly Bill 893 recently passed the Assembly and earned the approval of the state Senate Public Safety Committee. If signed into law, it would be effective Jan. 1, 2021.

The board of directors of the Cow Palace, a large state-owned fairgrounds near San Francisco, voted in April to ban the Crossroads shows there beginning next year. The company has been in business 44 years and has shows in four western states.

The next show at Del Mar will be Sept. 28 and 29, according to the Crossroads website. The December show is tentatively set for mid-month.