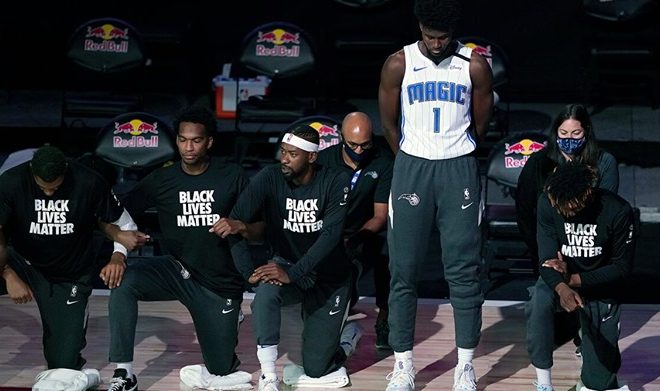 Orlando Magic forward Jonathan Isaac was the lone player to stand during the national anthem on Friday as his teammates and Brooklyn Nets players knelt to protest racial injustice and police brutality.

Isaac was the lone person out of the first three games of the NBA’s restarted season. He also didn’t wear a Black Lives Matter shirt and instead chose to stand with his arms at his back with his Magic jersey showing.

It’s also worth noting that Isaac was ruled out for the rest of the season in February after suffering a significant knee injury in January. He was able to play because of the time lapse between the injury and the NBA restarting the season. He checked into the game wearing a giant white leg brace on his left leg.

It wasn’t immediately clear why Isaac chose to stand while his other teammates knelt.

In June, Isaac was asked about the protests following the police-involved death of George Floyd.

He told Click Orlando: “Just because we are in the position of being an NBA player, it doesn’t give us automatically an understanding or insight to issues that happen around us. But I think because we have the ear of so many it’s important for us to be diligent, to be vocal, but in a balanced way.”

“The DeVos Family and the Orlando Magic organization fully supports Magic players who have chosen to leverage their professional platform to send a peaceful and powerful message condemning bigotry, racial injustice and the unwarranted use of violence by police, especially against people of color. We are proud of the positive impact our players have made and join with them in the belief that sports can bring people together – bridging divides and promoting inclusion, equality, diversity and unity. We know this is not about the military, the men and women who serve honorably to keep our communities safe for all, or those who have paid the ultimate price to provide freedom, including freedom of expression. We’re confident the entire Magic family has immense respect for these entities and individuals. This is about coming together to end racism once and for all. We are committed to walking alongside our players – today and in the many days ahead – in the pursuit of lasting and impactful change,” the team said.

The Magic are fighting for a playoff spot.

America First Reporting
← Previous Story Pelosi: With Such a ‘Big Frame,’ You Would Think Trump ‘Would Have an Ounce of Decency’
Next Story → Alveda King: Obama Politicized John Lewis’ Funeral– He Took Us Back to Segregated 1960s