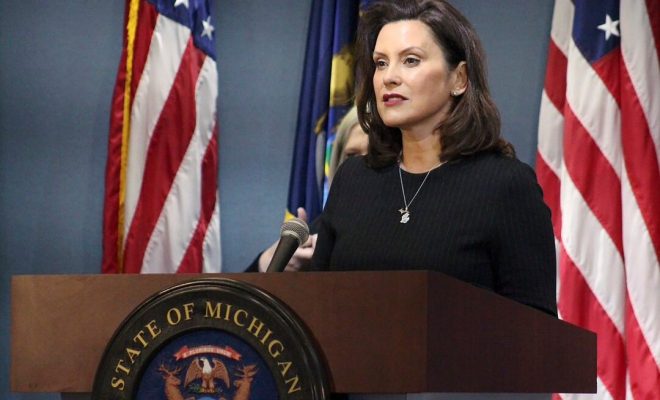 Gov. Gretchen Whitmer on Thursday extended Michigan’s state of emergency and disaster declaration through May 28, hours before it was set to expire and after hundreds of protesters, some of whom were armed, gathered in the state Capitol building to voice their displeasure with the Democratic governor.

Whitmer also took shots at the Republican-controlled legislature for refusing to extend the order earlier in the day.

“By refusing to extend the emergency and disaster declaration, Republican lawmakers are putting their heads in the sand and putting more lives and livelihoods at risk,” she said in a statement. “I’m not going to let that happen.”

The emergency declaration gives Whitmer additional powers to issue executive orders during an emergency. She claimed she had the emergency authority regardless of what state lawmakers did.

In a rejection of the governor, the state House and Senate adopted resolutions Thursday to legally challenge her authority and also approved a bill to allow some of her mandates but not her stay-at-home order, which expires May 16.

No lawsuit had been filed as of Thursday night, MLive reported.

Whitmer said she planned to veto the bill and won’t sign any bills that “that constrain her ability to protect the people of Michigan from this deadly virus in a timely manner,” her office said, according to The Detroit News.

Earlier in the day, hundreds of demonstrators, some armed with rifles, descended on the state Capitol building in Lansing to voice frustration over the stay-at-home order, which mandates temporary business closures and that residents remain home.

Many made it inside the building and stood shoulder-to-shoulder, calling for a return to normal daily life. Opponents accuse Whitmer of overstepping her authority by prohibiting sales of items like garden supplies and banning most travel between homes and certain activities.

An earlier rally on April 15 called “Operation Gridlock” drew thousands outside the Capitol building, in addition to another gathering outside Whitmer’s home. Similar demonstrations have occurred nationwide as many Americans remain concerned about their livelihoods.

The Michigan Court of Claims sided with the governor Wednesday, denying a motion for a preliminary injunction to the order. The court ruled that the stay-at-home order doesn’t violate residents’ constitutional rights.

Michigan recorded 41,379 COVID-19 cases as of Thursday, including 3,789 deaths, according to the state website.

In her declaration announcement, Whitmer said scientific data shows the state is not ready to resume normal operations.

“It defies common sense and science,” she said during a virtual town hall Thursday night. “We are still in a state of emergency. We have to take this seriously. If we are smart, we can start to reengage safely.”