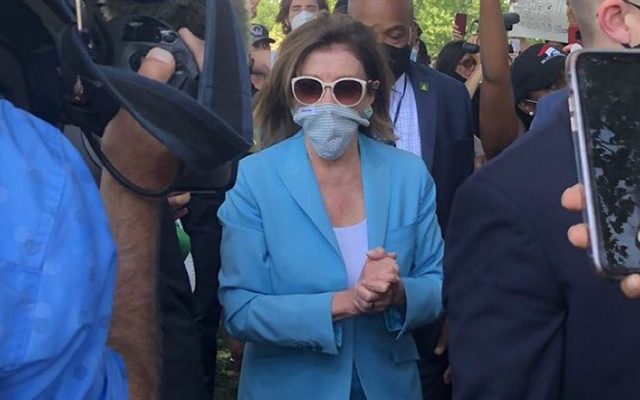 House Speaker Nancy Pelosi (D-CA) on Wednesday became the latest Democrat lawmaker to attended a protest against the death of George Floyd, walking through a demonstration outside the Capitol in Washington, D.C.

Flanked by members of her staff and security guards, a masked Pelosi made her way through a crowd of protesters on the Capitol’s east front.

Earlier Wednesday, Pelosi told MSNBC that she worried nationwide protests could lead to a resurgence in the spread of the Wuhan coronavirus.

“I am indeed concerned about that, because it is true that wearing a mask and social distancing are very important to stopping the spread,” the speaker told Morning Joe.

“And as people go out there, I hope that they know that they’re taking a risk, as well as bringing home – but there’s been some good social distancing among some of the crowds and on TV, they all look like they are very close together,” she added. “I think some of them are probably practicing social distancing. Let us hope so.”

On Tuesday evening, Sen. Elizabeth Warren (D-MA) and her husband joined a protest near the White House, where accused President Trump of “imposing violence on our people.”

Sen. Kamala Harris (D-CA) on Saturday attended a protest outside the White House, where hundreds of other demonstrators chanted: “Hands up. Don’t shoot.”

“Too often, black parents have to sit their teenage children down and tell them they may be stopped, arrested, or even shot because of the color of their skin. Our nation’s history of systemic racism and use of excessive force must be confronted so we can begin to heal,” Harris said of her attendance at the protest.

America First Reporting
← Previous Story Trump has had no side effects from hydroxychloroquine treatment, White House doctor says
Next Story → Dwayne ‘The Rock’ Johnson appears to jab Trump’s lack of leadership amid protests: ‘Where are you?’