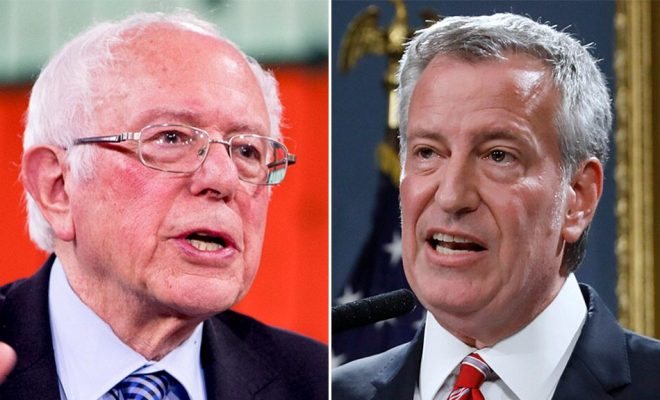 The Sanders campaign said De Blasio would join the self-described democratic socialist in Nevada this weekend to rally supporters across the state ahead of next week’s Democratic caucuses.

“I am standing with Bernie because he stands with working families, and always has,” de Blasio said in a statement issued by the Sanders campaign. “New Yorkers know all too well the damage caused by Donald Trump’s xenophobia, bigotry and recklessness, and Bernie is the candidate to take him on and take him down.”

“I have called for a bold, progressive agenda, and that’s exactly what Senator Sanders has championed for decades,” de Blasio continued. “I am proud to endorse a true progressive leader who will fight for working New Yorkers and families across the country.”

The Brooklyn-born Sanders tweeted that he is “proud to have the support of a mayor fighting every day to improve the lives of New Yorkers.”

De Blasio, who was elected New York City mayor in 2013, ended his own campaign for the Democratic nomination in September of last year after struggling to gain traction in the polls. The mayor endorsed Hillary Clinton over Sanders in the 2016 Democratic presidential race, but is the first former candidate to back Sanders this time around.

His support of Sanders comes as Bloomberg, who led New York for 12 years before de Blasio, has risen in the polls and racked up several endorsements after pouring hundreds of millions of dollars of his own money into the race.

However, Bloomberg’s campaign has recently come under scrutiny over the New York Police Department’s “stop-and-frisk” policy, which critics disproportionately impacted communities of color during his time as mayor. Other critics have accused Bloomberg of not doing enough while in office to stem widening income inequality.

On Thursday, President Trump called Bloomberg a “LOSER” and a “mass of dead energy” via Twitter.