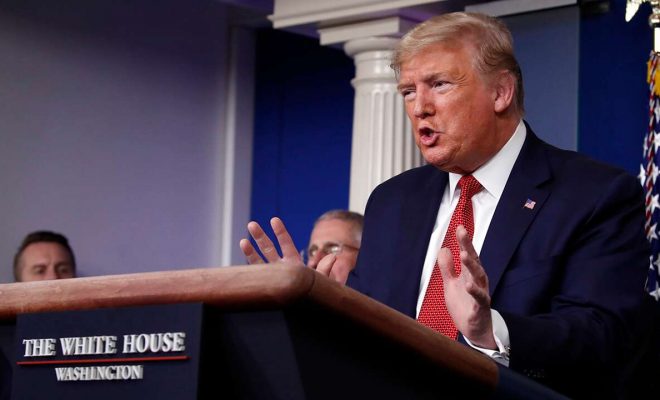 President Trump expressed skepticism Thursday night that the worst-case coronavirus pandemic scenarios would come to pass in the U.S., telling Fox News’ “Hannity” that “I have a feeling that a lot of the numbers that are being said in some areas are just bigger than they’re going to be.”

The president also hammered two Democratic governors after they criticized the federal government’s response to the pandemic.

“The first line of attack is supposed to be the hospitals and the local government and the states — the states themselves,” Trump said. “We have people like [Washington state] Governor [Jay] Inslee — he should be doing more.”

Trump went on to mock Inslee as a “failed [2020] presidential candidate” who is “always complaining.”

The Associated Press reported Thursday that Inslee implored Trump on a private conference call with governors from both parties to use executive authority to ramp up production of necessary medical equipment. But Trump said the federal government is merely the “backup.”

“I don’t want you to be the backup quarterback, we need you to be Tom Brady here,” Inslee reportedly replied, invoking the football star and Trump friend.

“I don’t know if she knows what’s going on but all she does is sit there and blame the federal government,” Trump said. “She doesn’t get it done and we send her a lot. Now she wants a declaration of emergency and we have to make a decision on that. But Michigan is a very important state.”

Earlier this week, Whitmer demanded “clear directives and guidance from the federal government.”

“Frankly, a patchwork strategy of each state doing what they can, we’re going to do it if we need to, but it would be nice to have a national strategy,” she said, according to MLive.

Whitmer claimed that if the administration had focused on the pandemic earlier, Michigan and the U.S. would “be in a stronger position right now.”

“Lives will be lost because we weren’t prepared,” she said.

Trump did praise New York’s Cuomo in another regard, saying the two have had constructive talks and correspondence over the past few weeks.

He also discussed his hope that parts of the U.S. economy would begin returning to normal by Easter Sunday.

Trump also ruled out canceling the Republican National Convention, which is scheduled to take place in Charlotte, N.C. in August, telling Hannity “no way I’m going to cancel the convention.”

In addition, the president dismissed criticism from his likely 2020 opponent, former Vice President Joe Biden, who called Trump racist earlier this year after the president issued an order halting the entry of foriegn nationals into the U.S. from China.

“I had Biden calling me xenophobic — yet he can’t define the word,” Trump said, joking that Biden called the H1N1 epidemic during the Obama-Biden administration the “N1H1” plague.

America First Reporting
← Previous Story Cher: Trump Thinks My Mom and I Should Be ‘Sacrificed’ for His Economy
Next Story → Alexandria Ocasio-Cortez Upset Cash Relief Does Not Extend to Noncitizens