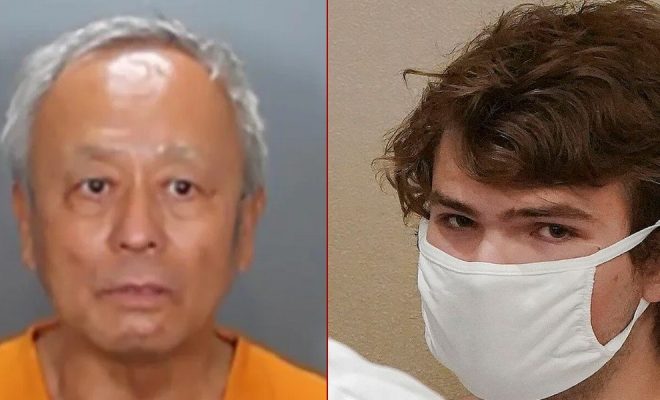 There were two mass shootings committed this week in America, but only a fraction of the public is aware they were committed by authoritarian leftists, due to selectively biased news media coverage.

On Sunday, Chinese-born man named David Wenwei Chou, a 68-year-old resident of Las Vegas, claimed the life of one person and wounded five others. It could have been much worse if not for the brave actions of Dr. John Cheng, who lost his life putting an end to the assailants’ shooting rampage.

Now there is a newly discovered development: Chou has connections to a Chinese communist front group, as was reported by the Epoch Times.

“The man charged with killing one person and injuring five others after a Taiwanese service at Geneva Presbyterian Church in Laguna Woods, California, was once a member of a U.S.-based group controlled by the Chinese Communist Party,” the Epoch Times reported.

“On April 2, 2019, the CCPPNR established a Las Vegas chapter, with Chou as one of the directors,” the report added. “He made a presentation with a banner calling for the ‘eradication of pro-independence demons’ on that day, Radio Free Asia reported.”

“The CCPPNR was founded by the CCP in 1988,” the report added as background. “Its primary mission, as stated on its website, is countering separatist movements such as those calling for Taiwan’s independence.”

Chou’s motive for committing the mass shooting was described in a hand-written note in Chinese he left on a car dashboard, as was reported by the L.A. Times.

“David Wenwei Chou, 68, of Las Vegas, left notes in Chinese in his car stating he did not believe Taiwan should be independent from China, said Orange County Sheriff Don Barnes,” the Times reported.

Also on Sunday, a mass shooting at a Buffalo, NY supermarket grabbed headlines due to the shocking fatality count of ten lives, but also because the majority of the victims were black.

The Buffalo mass shooting was labeled a “hate crime,” due in part to the racial motivation of an 18-year-old with a bizarre radicalized worldview that purportedly includes an authoritarian leftist past and white nationalist bent. The suspect Payton Gendron has described himself as being “mild-moderate authoritarian left.” These inconvenient facts did not stop departing Congresswoman Liz Cheney from getting in the petty cheapshot that House GOP leaders purportedly ‘enabled white nationalism.’

The Buffalo shooting seemed tailor-made to further the narrative that white supremacists are an existential threat to America, and thus, it garnered the lion’s share of coverage. The radical left immediately seized on the tragic mass shooting to smear political enemies. President Biden rushed off to Buffalo to console the families and local community impacted by the heinous mass shooting. It was a rare in-person visit from the president, who has largely hid from the limelight.

This is how the radical left avoids the same kind of scrutiny as the far-right gets in the U.S. media: The misleading coviding of terror events in databases, as well as selectively biased news coverage, leads to general ignorance about the threat it poses to the country.

One might point to Black Lives Matter as an example of a Marxist-led group that has avoided scrutiny, despite its leaders apparently siphoning off millions in funds. The riots that were launched in the wake of national tragedies like the George Floyd death in Minneapolis led to billions of dollars in damages and approximately two dozens deaths.

Beyond such a complicated matter of BLM’s inherently violent tendencies, since the overwhelming majority of the group’s supporters are non-violent, is the issue of the Supreme Court bracing for volatile protests in the wake of a leaked draft majority opinion that is set to strike down landmark abortion cases Roe v. Wade and Planned Parenthood v. Casey.

The Department of Homeland Security on Wednesday issued a carefully parsed memo that there are potential threats to the public and members of the Supreme Court in response to the national abortion debate, “including threats of burning down or storming the US Supreme Court and murdering justices and their clerks, members of Congress and lawful demonstrators,” as CNN reported.

However, the DHS is not shooting straight: There is no reason to believe that anti-abortion activists would violently protest against the Supreme Court for striking down landmark abortion precedents. It defies basic logical deduction, but is consistent with DHS’s track record of politicized statements that paint the American right with the ‘dangerous’ broad brush, but downplay the threat posed by leftists.

Intelligence officials nonetheless claimed people “across a broad range of ideologies are attempting to justify and inspire attacks against abortion-related targets and ideological opponents at lawful protests.”

Thus, the rise of left-wing extremism is a serious threat development that is being downplayed by the U.S. media and the Department of Homeland Security. That the radical left would be protected from scrutiny is no surprise; however, the trend of ideologically left-wing political violence is one that should be noted.

Related Items
America First Reporting
← Previous Story Have You Heard Of A “Warrant Canary”? TruthSocial Has One, Twitter and Facebook Do Not…
Next Story → NEW VIDEO: Is There A Satanic Portal Hanging Over The White House?