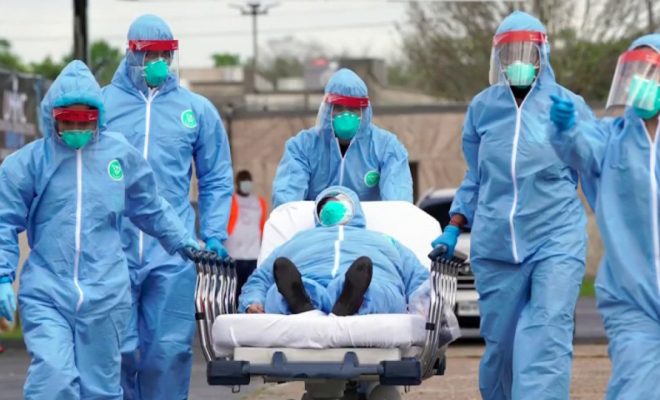 US was more prepared for pandemic than any other country, Johns Hopkins study found

The United States was ranked the best-prepared country in the world to handle a pandemic in late 2019 by the Nuclear Threat Initiative (NTI) and the Johns Hopkins Center for Health Security (JHCHS) — an assessment seemingly at odds with claims by Democrats that the Trump administration left the country vulnerable to the ongoing coronavirus outbreak.

The Global Health Security Index was was “developed with guidance from an international panel of experts from 13 countries, with research by the Economist Intelligence Unit” from 2018 to 2019, The Washington Post reported last year. “More than 100 researchers spent a year collecting and validating publicly available data.”

At the same time, the paper noted that the U.S. score was still not perfect, and that “factors driving down the U.S. score include the risks of social unrest and terrorism, and low public confidence in government.”

President Trump’s campaign has argued in recent days that misinformation may be one of the leading causes of that lack of confidence. For example, Trump’s team has pointed to claims by presidential contender Joe Biden that “no one on the National Security Council staff was put in charge” of pandemic preparedness, based on a report that in May 2018, then-National Security Adviser John Bolton eliminated the NSC’s Office of Global Health Security and Biodefense in a reorganization effort.

Rear Adm. R. Timothy Ziemer reportedly was ousted as senior director, and no replacement was named. But, FactCheck.org has determined that the matter amounted to a reorganization, and that “some team members [of the NSC pandemic office] were shifted to other groups, and others took over some of [the top official’s] duties.”

The White House says the NSC remains involved in responding to the coronavirus pandemic. A senior administration official said earlier this month that the NSC’s global health security directorate was absorbed into another division where similar responsibilities still exist, but under different titles. The work of coordinating policy and making sure that decisions made by Trump’s coronavirus task force are implemented is still the job of the NSC.

Separately, the Biden team has repeatedly argued that the president once referred to coronavirus as a “hoax.” That claim has been refuted by numerous fact-checkers, including the Post’s, which found that Trump was clearly referring to Democrats’ efforts to blame him for the pandemic, not the virus itself.

Additionally, numerous Democrats, including Biden, have falsely claimed that the president cut the Centers for Disease Control and Prevention (CDC) budget. The Associated Press has noted that those claims “distort” the facts.

Trump’s budgets have proposed cuts to public health, only to be overruled by Congress, where there’s strong bipartisan support for agencies such as the CDC and NIH. Instead, financing has increased. Indeed, the money that government disease detectives first tapped to fight the latest outbreak was a congressional fund created for health emergencies.

Some public health experts say a bigger concern than White House budgets is the steady erosion of a CDC grant program for state and local public health emergency preparedness — the front lines in detecting and battling new disease. But that decline was set in motion by a congressional budget measure that predates Trump.

“The CDC’s response has been excellent, as it has been in the past,” said John Auerbach, president of the nonpartisan Trust for America’s Health, which works with government at all levels to improve the nation’s response to high-risk health crises. Some Democrats have charged that Trump decimated the nation’s public health leadership, but Auerbach said CDC’s top scientific ranks have remained stable during the past three years.

Nevertheless, misleading reports about the Trump campaign’s pandemic response efforts have continued to spread. A recent report by Reuters that the U.S. had recently terminated a CDC position in China was widely cited by Democrats and reporters as evidence of a lack of preparedness, and formed the basis for a reporter’s question at a recent White House coronavirus briefing.

But, the article itself made clear that experts didn’t think the move had anything to do with the spread of coronavirus in the United States.

“One disease expert told Reuters he was skeptical that the U.S. resident adviser would have been able to get earlier or better information to the Trump administration, given the Chinese government’s suppression of information,” the outlet noted.

“In the end, based on circumstances in China, it probably wouldn’t have made a big difference,” former CDC epidemiologist and Emory University professor Scott McNabb told Reuters.

Regardless, some lawmakers are pushing for more action out of an abundance of caution. Rep. Gerald Connolly, D-Va., and Rep. Steve Chabot, R-Ohio, have introduced a bill that would require future administrations to have experts always in place to prepare for new pandemics.

“Two years ago, the administration dismantled the apparatus that had been put in place five years before in the face of the Ebola crisis,” Connolly said. “I think, in retrospect, that was an unwise move. This bill would restore that and institutionalize it.”

Connolly said the bill is not meant to be critical of the Trump administration. He said it’s a recognition that Trump had to name a coronavirus responder just like Obama had to name one for Ebola in 2014. “We can’t go from pandemic to pandemic,” Connolly said.

The House Foreign Affairs Committee on March 4 passed the measure, which is co-sponsored by 37 Democrats and five Republicans.