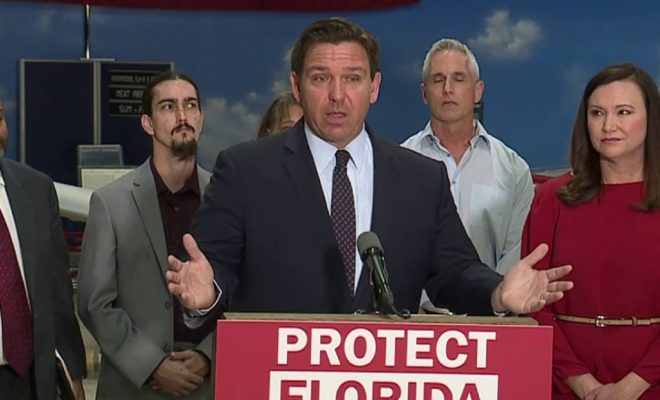 ‘You Have No Idea What You’re Talking About’: DeSantis Fires Back At Critics

Florida Republican Gov. Ron DeSantis went off on critics who are calling him a “dictator,” saying they have no idea what they are talking about.

During a press conference, the popular governor was asked about Democrats and their allies in the mainstream media alleging that his policies have harmed the state and made it “worse” to live in.

DeSantis immediately hit back, saying people are “fleeing to the state” and that critics have no clue what they are even talking about.

“Well, I think it’s a slap in the face to everybody in South Florida that has experience with these Marxist dictators in our hemisphere. You have people who were driven out of the island of Cuba, you have people that will — that so bad the oppression there, that they would get on a raft and go 90 miles over shark-infested waters, to be able to get to freedom,” DeSantis began.

“You have people whose entire livelihoods were taken from them, their entire liberties were taken away from them. And then they’ve come to here in South Florida. You’ve seen the same thing of what’s happened with Venezuela, used to be a very prosperous country, then Chavez and Maduro, now it’s like a third world country, even though they have so many natural resources,” he added.

“You look at what’s happened in Nicaragua. You look at what could happen in places like Colombia. So to equate Florida, which is viewed not only in our country but even around the world as a beachhead of freedom, to equate that with those regimes, just shows that you have no idea what you’re talking about. And I think that it really does a disservice to the oppression that so many people in southern Florida have faced either firsthand or through members of their families. And there’s a reason why people are pouring into the state of Florida. There’s a reason why we’ve led the country in net — in migration. I’m not even asking anybody to come,” he charged.

DeSantis added: “And so I realized there may be some people in the state of Florida, not in my party, but some others politicians who have a soft spot for dictatorships like in Cuba, they have a soft spot for people like Maduro and Ortega, and I just want people to know that I have contempt for those views because those views do not represent the values of the state of Florida but particularly the values of the people of South Florida.”

DeSantis had a viral exchange with a reporter last month over critics referring to the “Parental Rights Bill” as “Don’t Say Gay.”

Reporter Evan Donovan shared a video of the exchange to Twitter, where he asked DeSantis if he supported the legislation.

“Does it say that that in the bill?” DeSantis asked repeatedly as many in the room cheered and applauded the governor.